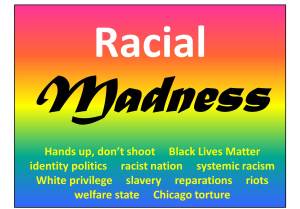 The Washington Post suggested it was inconsequential. CNN called it a “hazing.” One CNN panelist actually blamed Trump! NBC argued the thugs were not “truly trying to be criminal.” (Imagine saying that about the abominable Dylann Roof.)

In related news, a university professor tweeted “All I Want for Christmas is White Genocide.” This professor remains employed.

Despite Obama winning the presidency twice in a majority white nation, the racial grievance industry took control of the national debate. (No, not the KKK; the BLM.)

Enslaved and energized by identity politics – and rejecting the promises and realities of Martin Luther King’s famous dream – the Black Lives Matter movement employed a range of racial myths to create a constituency and gain power and prestige. (Let’s not forget the money.)

Some of these narratives (e.g., “Hands Up, Don’t Shoot”) have been proven totally false, yet they retain a visceral power which overwhelms reason and reality.

From Ferguson to Baltimore and across the nation, Black Lives Matter propaganda has destroyed communities and created chaos.

Rather, some blacks are victims of a fifty-year-old War on Poverty and a welfare state which has become the new plantation – created by Democrats who treat them as children. The paternalistic state gone awry.

The welfare state – not white racism – has created generational poverty, generational broken homes, and a cultural of dependency justified by allegations that blacks are victims of white racism and the legacy of slavery.

Consequently, perceiving themselves to be victims, many feel entitled to whatever they can get from the government, becoming dependent upon that government. With it, comes rage against the injustices they perceive have been perpetrated against them. And with that comes a culture of irresponsibility.

David French observes, “When you celebrate thugs, you get more thugs.” He laments a “depraved culture” and “breakdown in law and order.”

French concludes: “Our nation’s social fabric is fraying — nowhere more than in Chicago. This is the Left’s city, a foundation of its national power. How many more people have to die before it changes course?”

Contemporary dysfunctional black communities are not rooted in America’s founding. Rather, one need only look to Lyndon Johnson’s Great Society and subsequent iterations of the welfare state and the adoption of progressive policies and political correctness to see the development and escalation of dysfunctional pathologies in some black (and a growing number of white) communities.

America No Longer Needs to Apologize for Slavery

My MSNBC Op-Ed (7/2/97), entitled, “America has acknowledged mistakes,” is as relevant today as it was twenty years ago. Here it is:

Kimberle Crenshaw writes about passionate “white opposition” to a formal apology for slavery (neglecting to mention the many blacks who oppose it as well). While citing their objections (in her terms: “personal denial,” “finger pointing,” “traditional historicizing,” and “new-age globalizing”), she fails to refute any of those arguments. She doesn’t even try.

Instead, Crenshaw questions the motives of those opposed to an apology, saying it “reflects a deep unwillingness to desegregate American history and to integrate American self-identity.” Self-flagellation is not my self-identity.

Crenshaw contrasts post-slave, post-apartheid societies with non-slave, non-apartheid ones, failing to note that all societies are at least post-slave and, even today, many societies remain slave societies. (Why is the Left always willing to condemn America but praise our enemies?)

Crenshaw desires “historical closure.” Most Americans have experienced “closure” with past slavery. Constantly tearing at the scab only causes the wound to bleed.

Par for the course, Crenshaw criticizes America’s Founding Fathers for expressing the ideals of liberty for all while condoning slavery. No one disputes the divergence of these ideals and their implementation.

Crenshaw insists that whites – and American culture itself – are in a state of denial about slavery (and other historical atrocities). Denial? Our cultural elites positively revel in past American misdeeds (while glossing over our triumphs and glories).

Is Crenshaw really suggesting that Americans are denying historical slavery? Is she subtly suggesting a moral equivalence between this perceived denial and those who deny the Holocaust?

Tragically, while her ancestors may have been enslaved in chains, Crenshaw (and others) have enslaved themselves to the past. She desires “a reopening of American historical memory,” as if anyone could “forget” American slavery. She wants an acknowledgement of America’s “tragic mistakes” but Americans have already acknowledged them.

We are fast approaching a new millennium. Isn’t it time to put the past behind us, to let the wounds heal, to live for the future? Until we do, this schizophrenic identity crisis will only exacerbate the already tumultuous times we are living in.