The liberal “mainstream” media regularly targets, en masse, Republican candidates with its narrative of the moment – and timid Republicans typically cower, duck and cover. The latest gambit – which the GOP fell for – was to demand an answer to a hypothetical question: “If you had known then what you know now, would you have invaded Iraq?” 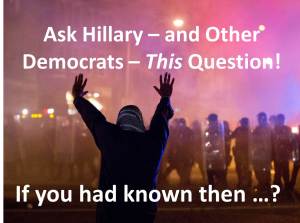 The correct answer, as David French noted, should have been “knowing now what we didn’t know then, the answer is a smarter intervention, not the same intervention – an intervention that combines the tactics and lessons of the Surge with the staying power we’ve demonstrated in other volatile hot spots, like Korea. The alternative – as we know – is a growing jihadist menace, genocide against Christians and other religious minorities, and increased instability in a geopolitically vital region.”

That is the Jeb Bush Question taken care of.

Now, let me offer you a Hillary Clinton Question. No, not about her myriad scandals, ethical lapses (can they be termed “lapses” if they are continuous?), and various missteps and imbroglios.

Instead – just as the Left targets the grand geopolitical thinking of the Right vis-à-vis military intervention – the Right should aim its sights a bit higher and larger in scope and ask the ultimate domestic policy question:

“If you had known then what you know now, would you have embraced LBJ’s Great Society and War on Poverty?

“If so, what do you say to the millions of minorities who have been disenfranchised by these welfare programs? What of the broken lives, broken families, broken homes, broken communities, and broken social fabric in America which are a direct result of these disastrous programs?”

“How do you justify the heartache, the dashed dreams, lost hope, hate-filled anger, and desperate despair?”

“How do you justify squandering countless trillions of dollars which only served to produce counterproductive results?”

“How do you atone for resultant race riots, the destruction of whole communities, and the loss of life?”

“How can Americans entrust to you the future of these communities which have been devastated by your liberal policies if your only solution is to continue and expand those self-evidently destructive policies?”

Finally: “Will you do for the rest of America what you have done for Detroit, Ferguson, and Baltimore?”