Jason Scott Jones provides a prescription to revive American leadership in the world. To that end, Jones offers six core principles our national leaders should adopt.

“These are the maxims that made America great, that allowed her to grow from a marginal string of settlements on the edge of a howling wilderness, to the champion of freedom against totalitarian empires. If we return to this creed with fortitude and humility, we can again serve the world as a solid bulwark of justice in increasingly desperate times.”

Not surprisingly, speakers and attendees at CPAC were almost uniformly opposed to President Obama’s foreign policies. The divide between Left and Right has never been so stark.

A Clear and Present Danger

Gov. Rick Perry noted, “At no time in the last 25 years has the future been more uncertain and the world less safe.”[1] Perry correctly called Islamists worldwide “a religious group that seeks to take the world back to the 7th century” and said that “ISIS represents the greatest threat to freedom since Communism.”

Gov. Bobby Jindal boldly declared the obvious (to everyone but the Obama administration), “We are at war with radical Islam.”[2] Countering the White House’s policy of appeasement,[3] Jindal said, “We must fight and win the war against radical Islamic terrorism.”[4]

Jindal received a standing ovation for daring to assert that medieval Christians pose no threat in the world today, but that radical Islam does.[5]

Sen. Marco Rubio said, “Because of the Obama-Clinton foreign policy, our allies no longer trust us and our enemies no longer fear us. … [Obama has] a foreign policy that treats the Ayatollah of Iran with more respect than the Prime Minister of Israel.”[6]

Rubio highlighted the Obama administration’s flight from reality:[7] “Imagine if we didn’t have a Secretary of State who believes the world is safer than it’s ever been, while at the same time radical Islamic jihadists are taking young women as brides, are burning prisoners in cages, and are beheading Christians on a beach in Libya.”

Sen. Rand Paul admitted, “In the Middle East a dangerous and barbaric cult has arisen,” though mysteriously limiting this global phenomenon to the Middle East.[8]

Taking a contrarian perspective, Paul cautioned, “Without question, we must now defend ourselves and American interests from this barbarous aberration; but it troubles me that we must now fight against our own weapons. As conservatives we should not succumb to the notion that a government inept at home will somehow become successful abroad.”

American exceptionalism and the need for a moral vision were underscored by many speakers. Indeed, the world is ablaze precisely because so many leaders lack moral vision, integrity, or courage.

Sen. Ted Cruz urged, “Restore America’s leadership in the world as a shining city on a hill.”[9] Cruz, and others, suggested we build upon our national heritage, putting into practice the proven principles which shaped America into a force for good in the world.

Sen. Rick Santorum observed, “If America doesn’t lead the world, someone else will.” Evil leaders in evil regimes[10] and terrorists around the globe have certainly been filling the vacuum vacated by America.[11]

Gov. Sarah Palin offered a poignant paean of praise to America’s military. Calling the Middle East “a death cult’s playground,” Palin said that the only thing standing between us and terrorists is the United States military.

Victory, she noted, requires the “political will to win”[12] – a characteristic sadly lacking among the political and cultural elite, today.[13] Palin urged American leaders to confront “evil with moral clarity.”[14]

In a Reaganesque manner, Palin declared, “We will never submit to evil. We will confine radical Islam to the ash heap of history. Just like the Nazis before them.”

Mocking the “War Is Not The Answer” crowd, Palin added, “They say we can’t kill our way out of war. Really? Tell that to the Nazis. Oh, wait, you can’t because they’re dead. We killed them.”

Integral to America’s security is her relationship with Israel and her opposition to a truly global threat: Iran.

Ambassador John Bolton criticized the White House for its anti-Israeli worldview,[16] saying, “President Obama has the worst relationship with Israel since the state of Israel was created in 1948.” Calling it “reprehensible,” Bolton chastised Obama for regarding “the single gravest threat to peace and security in the region, according to the Obama/Clinton view, is Israel building apartments in East Jerusalem.”

Bolton warned of the “existential threat” that Israel faces “from Iranian nuclear weapons – the threat of what some have called a nuclear holocaust.” A nuclear Iran would endanger civilization wherever it exists and would ignite a nuclear arms race in the Middle East.

I interviewed a few of the speakers at CPAC. Among them,

Asked how to achieve victory against Islamists, Col. Allen West replied, “First of all, you have to identify in order to defeat the ideology. You have to be able to cut off its financial support, cut off his diplomatic support as far as other states that are sponsoring these non-state, non-uniformed belligerents, and then, the bottom line is, you’re gonna have to get on the battlefield and kill ‘em.” (Audio)

“What foreign policy are you talking about? I don’t mean to be sarcastic, but, what foreign policy? There is no foreign policy! I mean, to say that there is a foreign policy implies that he’s actually had one. I mean, where has he even been consistent? You know, if you did a debate – and I’ve done this on a radio show I do, where you debate President Obama with President Obama, using his words, not as a joke – you’ll actually find out that he debates himself. He says the exact opposite thing about a number of issues. So, it’s really hard to pin President Obama down. You know, he loves Israel in his speech, but then he does the exact opposite.[18] You know, he declares red lines, meaning, ‘Don’t cross this,’ until people actually cross it. You know, he declares his support for regimes, until he doesn’t. So, there really is no foreign policy. So, it’s really difficult to comment on something that doesn’t exist.” (Audio) 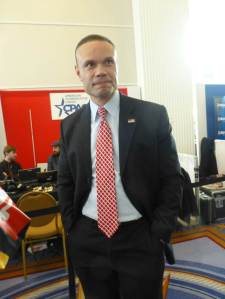 Bongino also offered a strategy for dealing with the military and terrorist threats facing America and her allies:

“We need to focus less on military personnel on the ground in these countries and more of a counter-intelligence, intelligence, and training function overseas. One of the things in the Secret Service I always found to be most effective was joint training missions. You would be surprised how much good will between people who can really make a difference in some of these foreign policy areas, good will that’s accomplished through things like joint training and intelligence sharing. I think we have to focus less on putting our people on the front lines and getting other people to fight the fights they should be fighting.” (Audio)

President Obama has exchanged Ronald Reagan’s “peace through strength” for “victory through weakness” and he has transformed Theodore Roosevelt’s “Talk softly and carry a big stick” into “Talk boldly and give away your stick.” 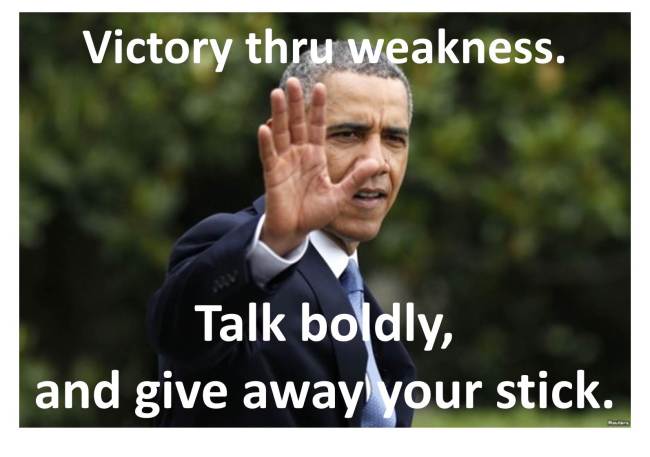 America’s blood and treasure have been squandered by a president who seemingly values neither. As a consequence, the threat from Islamic jihadists has never been greater and America’s prestige in the world has never been lower.

In Obama’s world, America is stronger when it is weaker and the world is safer when America is disengaged.

Obama campaigned on ending two wars and he has been dedicated to achieving that goal, regardless of real world consequences. He foolishly insists upon proclaiming timetables for withdrawal based upon political criteria and not military exigencies. As Brit Hume put it, the Obama administration “believes leaving is winning.”[i]

In his rush to exit Iraq and Afghanistan in order to create is legacy as the president who ended two wars, Obama has forfeited the fight and is giving as spoil all of the gains made in the war on terror – a war he contends is already over.

Author Charles Krauthammer noted: “What Obama doesn’t seem to understand is that American inaction creates a vacuum. His evacuation from Iraq consigned that country to Iranian hegemony, just as Obama’s writing off Syria invited in Russia, Iran and Hezbollah to reverse the tide of battle.”

Every time America retreats from the world stage, the good that America could do diminishes and the evil which could be thwarted advances.

A New York Daily News editorial[ii] explained in stark terms the result of Obama’s policy of disengagement: “The world is reaping what Obama helped sow.”

It continued, “But he left no residual force to combat terrorism, having failed to reach a troop agreement with Prime Minister Nouri al-Maliki. In our absence, ISIS grew quickly into a malignant force.”

Also: “When civil war broke out across the border in Syria, Obama proved impotent.”

“Overeager to leave Iraq, gun-shy about intervening in Syria and insufficiently vigilant about the rising threat of ISIS, the President opened the way to an Islamist force of unprecedented power.”

“The toll wreaked by his disengagement from the world and retreat from the use of American influence is severe. While ISIS expands its reach with summary executions possibly running into the thousands, Obama is left to offload onto Maliki all responsibility for the chaos that’s happened and all that’s to come. That’s the easy way for Obama to escape admitting that he blew it.” 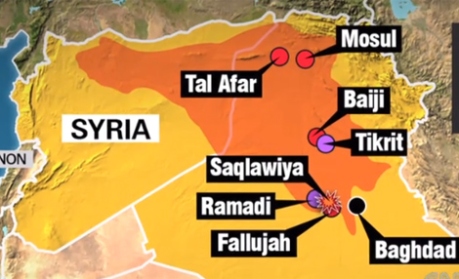 Craig Crawford is typical of those defending Obama. But his argument actually indicts his conclusion. Crawford said, “Obama has disowned Iraq. … He’s not the face of that.”[iii] Oh, but he is. His precipitous and complete withdrawal precipitated the chaos which ensued.

It is precisely because Obama disowned Iraq that Obama owns it. Obama forfeited the peace which his predecessor had won. America’s absence from the arena gave free reign to terrorists to wreak havoc to their hearts’ content.

Richard Cohen, hardly a neo-conservative, recently noted the obvious.[iv] Cohen asked, “Whose fault is the current debacle in Iraq? … The one person who is not at fault, we are told over and over again, is the current President of the United States.”

Cohen added, “Other than avoiding war, it’s hard to know what Obama wants.”

Cohen’s conclusion? “He now must deal with a region that is so much worse than anyone imagined. Where does the fault lie? Where it always has – where the buck stops.”