#NeverTrump: Coulter’s Alt-Right Utopia explains what Donald Trump’s “New American Revolution” portends and why we should oppose it. 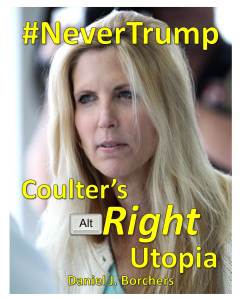 Ann Coulter is the high priestess of the Alt-Right and Trump’s consigliere, propagandist, muse, and wannabee consort. (Coulter offers herself up as the model, the quintessential American.)

The Alt-Right has transformed patriotism into an isolationistic nationalism which eschews both foreigners (outside) and immigrants (inside) alike. It redefines the very terms “American” and “citizenship.”

The Alt-Right is the mirror image of leftist social justice warriors.

For removal from future distribution, please reply to this email.

Romano discovered that Trump’s peculiar “patois” is probably deliberate and “has developed into a remarkably effective delivery mechanism for his message.” He cites five “linguistic quirks” that stand out.

Trump’s first stand-out speaking trait is “digression” – his inability be laser-focused on any given thought at any given time. His constant meandering includes revisions, amendments, and contradictions. As Romano notes, “Even his parentheticals have parentheticals.”

Endless repetition is another Trumpian hallmark. Romano writes: “He repeats phrases one after the other, often in the same sentence – not as deliberate parallelism but as a compulsive placeholder.”

A third attribute, intensifiers, builds upon an entire spectrum of hyperbole and superlatives to which he adds intensive modifiers. “Trump’s addiction to hyperbole goes deeper than superlatives,” writes Romano, adding, “it also permeates the little words he uses to modify his adjectives and adverbs.”

Informality is yet another distinctive trait. Romano writes, “It’s not just his public use of the S word, the F word, the A word and the P word.” “Trump’s informality extends beyond vulgarity and disrespect.”

Finally, Trump tends to end his thoughts with punchlines. As Romano observes, “Trump speaks more like a comedian, making sure to go out with a bang. In fact, he often rearranges the beginning of his sentences awkwardly so he can end strong.”

In the end, Trump is a salesman and his product is himself. He uses these speaking traits to connect with his marks and sell himself, an endeavor in which he has triumphed.

[Timeline courtesy of the Miami Herald.]

“… let us lay aside every weight, and the sin which so easily ensnares us, and let us run with endurance the race that is set before us, looking unto Jesus, the author and finisher of our faith …” – Hebrews 12:1-2 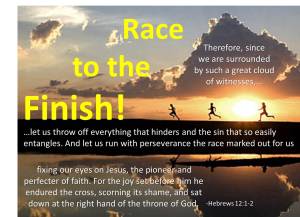 If you were in the Olympics, would you stand still and just watch or would you strive with all your heart to win?

The apostle Paul encouraged Christians to race for victory as we run for Jesus.

Paul admonishes us to “lay aside every weight” which could cause us to fall.

It is easy to become distracted, and even consumed, by the things of this world. Those things might even be good and wholesome in their own right, but they can sideline us.

For instance, it would be better to memorize Scripture than song lyrics, sports stats, or trivia.

Beware the peril of remaining stationary. It is easy to forget the race we are in and to simply stand still. Let’s stay awake and keep moving forward in our journey with Jesus.

If it hinders you, get rid of it. We each have our own hindrances. Set them aside. Run your race.

Reject the negative voices within you and from the world and listen to the right voices coming from God and his Word.

Paul warned against “the sin which so easily ensnares us.” That sin is unbelief (Hebrews 11:6). Let us renew our faith by “looking unto Jesus, the author and finisher of our faith.”

How do we get back on track?

Believe and look to Jesus!

God did not send us here just to run the race, but also to finish it. Let’s finish it in faith!

Some worshippers called Donald Trump the Savior of America and of civilization itself.[1] They believed Trump could save the nation from the Establishment[2] and statism[3] which it promotes. 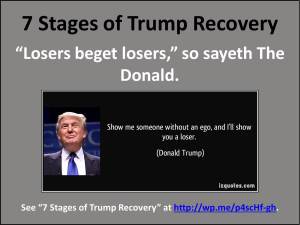 Instead, Trump has only sacrificed them on the cross of his own ego.

Trump was never – and never could have been – their or our Savior. Trump has always been a part of the Establishment his followers detest. His entire life is one of self-interest and self-aggrandizement fueled by an unrelenting narcissism.

Yet many who believed in him did so because of, not in spite of, his delusions of grandeur. They were looking for a strong man to save the Republic and, instead, nominated a bully[4] and would-be tyrant.[5]

From the beginning, Trump was destined to lose.[6] A liberal posing as a conservative and running as a Republican could never win against a liberal (or even a socialist) running as a Democrat.[7]

Despite Trump’s daily lies and reversals of policy positions,[8] his support surged among the faithful. Even when it was obvious that Trump was mentally unhinged,[9] his followers persisted. Even though Trump’s core “principles” became “flexible” and “negotiable,”[10] they insisted that Trump would do what they want him to do.

When Trump loses – and he will lose – Trump worshippers will have to reconcile themselves to reality. Some won’t. Some are as obstinate and bullying as Trump. Narcissists don’t know how to repent or how to admit error.

For those who are capable of facing reality and being held accountable, this handy outline was designed just for you: 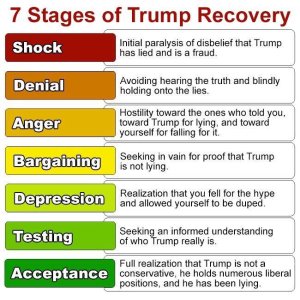 #NeverTrump has proven itself faithful to the core principles upon which America was founded, the very principles espoused and defended by Ted Cruz.[11]

In contrast, #ForeverTrump forever owes a debt to America.

In the end, we will all have to live with the end of the American Experiment.[12]

For most of this year, Americans have wondered when GOP presidential nominee Donald Trump would pivot into a more substantive and presidential figure. They’re still waiting for Godot, too.

Donald Trump has little hands and no pivot.

A graphic provided by Brad Thor explains the latter, though not the former.

Thor tweeted: “Why there has been no pivot and Trump cannot stay on message: Narcissistic personality disorder.”

By the way, Trump’s consigliere, Ann Coulter, suffers from much the same condition. They could even be twins!

As Donald Trump’s campaign continues its freefall, his top strategists seek to halt its plummet into oblivion. Highlights from this satire by The Resurgent offers keen suggestions: 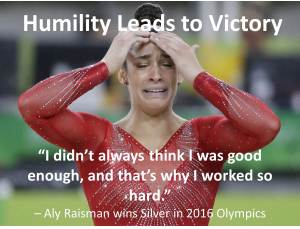 In the immediate aftermath of the ISIS terrorist attack in Munich, Germany, MSNBC anchor Brian Williams mused, “And why does it feel so strange to kind of root for it not being ISIS?”

Let me respond to his question. It should feel strange to root for such a thing. Why root for the enemy? Would Christian terrorists or crazy right-wingers be preferable culprits?

Can you imagine anyone during World War II saying, “It feels so strange to kind of root for that bombing of London not being the work of the Nazis?” How many different enemies does Williams want?

Williams explained his irrational rationale – his deep desire – “to break the cycle [of ISIS] even though every death is an absolute tragedy and this just means we have deranged people without the affiliation?”

He would prefer this attack had been committed by “deranged people” not affiliated with ISIS. Is Williams a “useful idiot” for a global terrorist network, a “fellow traveler” with those who seek to destroy Western Civilization?

Is Williams serious? In addition to being at war with a vast army of cruel barbarians intent upon destroying us to achieve their religious/ideological utopia based upon the Koran, Williams also wants more “deranged people” not affiliated with ISIS for us to combat.

Why? So he can feel good about being inclusive and dismiss the reality of Islamic jihad?

The Left’s constant moral equivalence during the Cold War between the West and the Evil Empire has shifted to an equally insane and suicidal moral equivalence between Muslim jihadists and Christian conservatives peacefully engaged in the political process.

Ever on the alert for mythical Christian terrorists to condemn, the Left is willfully blind to the Islamist threat we face every day.

But Williams merely follows in the footsteps of his ideological predecessors and comrades and who have been redefining terrorism for years.

In the immediate aftermath of the 2013 Boston Marathon bombing, many commentators and members of the mainstream media jumped to the conclusion that that terrorist attack was committed by the “extreme right,” anti-government groups, or the Tea Party.

Let’s recognize the enemy, name him, and defeat him!

While we still can!

Liberty died in Cleveland on Tuesday.[1]

Trump supporters, however, are blind to the reality that they are backing a purported anti-establishment nominee who has always been part of the establishment.

When did heeding your conscience become a bad thing?

Barack Obama ruthlessly wields his pen and phone to circumvent the Constitution[3] and thwart the will of the People. Hillary Clinton[4] is self-evidently a statist averse to the rule of law and wants to further transform America in even more fundamental ways.[5]

Donald Trump, also a statist, is an authoritarian[6] bully[7] to boot, and he has proven his propensity to use his boots to stamp on human faces forever,[8] as so vividly pictured by George Orwell.

That more people hate their respective party’s candidates than like them shows the extent to which the establishment opposes the will of the People to pursue their own ends. Both Hillary and Trump are anathema to lovers of Liberty and America.[9]

Even though the establishment Left & Right have seized control and consolidated their power, the fight must go on for Liberty.[10] The American spirit can only succeed when it is committed and engaged in the fight.

Let us fight for Liberty!