The grief-stricken father of a 20-year-old boy who was killed in a massacre in Santa Barbara yesterday asked a crucial question, “When will this insanity stop?” But his solution – gun control – cannot work because it does not address the real problem hinted at in his very question. 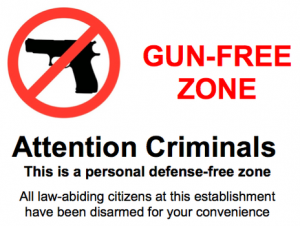 Insanity, not guns, is the problem. There are ample gun laws on the books now. But for over half-a-century, political correctness has targeted guns and de-stigmatized mental illness. Over the years, the potential dangers of some forms of mental illness have been glossed over. Consequently, the liberal media and anti-gun activist groups focus on weapons and not those wielding them.

In mass shooting after mass shooting, crazy people do crazy things. That’s why they are recognized to be crazy. But the almost inevitable liberal knee-jerk response any form of gun violence is to ignore the insanity and attack the NRA.

Guns don’t kill people, insane people kill people. The 22-year-old shooter, Eliott Rodger, wrote a 141-page manifesto and YouTube videos which demonstrated his mental instability. His family and friends knew he posed a threat and informed the authorities. Of the massacre, Sheriff Bill Brown said, “It’s obviously the work of a madman.”

Let’s stop blaming the weapon and focus on evil in the human heart.

In many of these tragedies, the culprits were known to have psychiatric problems but 1) did not obtain the help they needed and 2) due to privacy laws, that information was not passed on to those who should have been informed (e.g., schools, gun stores).

Rep. Tim Murphy (R-PA) is spearheading efforts to overhaul the mental health aspects of health care with the Helping Families in Mental Health Crisis Act. Passage of this bill, which arose in response to the Sandy Hook massacre, would facilitate the treatment of mental disorders and make it easier to connect the dots between those who pose a threat with access to deadly weapons.

Let’s stop the insanity over gun violence by stopping the violently insane instead of targeting innocent gun owners exercising their Second Amendment rights.

“compare America’s per capita murder rate of 4.7 per 100,000 resident to that of a US city like Detroit, Michigan, where socialist and communist Democrats have imposed massive gun control. In Detroit, the murder rate is 54.6 per 100,000. Consider that is Detroit was a country, it would be in second place, just behind Honduras!

“Out of 218 countries, ‘gun culture America’ didn’t even make it into the top 100 of those countries with the highest murder rates per capita. She came in 111.”

“So, consider that 4.7 per 100,000 includes these high crime areas, which have been largely controlled by socialists. Why then is the overall number of murders in America as low as it is? It’s because of largely of cities where guns are lawfully carried and used.”

4 thoughts on “Let’s Stop the Insanity Over Gun Violence”